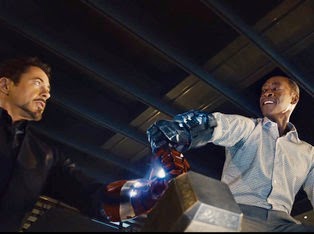 It’s not always easy to start something, and the end may not be the clearest, but the middle, particularly the middle of a series, can be difficult. You have to balance a satisfying story that picks up where the beginning ends, and leave off enough to ensure that there will be enough for the movie to tell a satisfying ending to the story.

That was the balancing act that Joss Whedon had to walk when working on Avengers: Age of Ultron.

There’s also the balancing act that this isn’t a typical sequel… Iron Man, Thor, Captain America, and Black Widow all ran off and had their own adventures in between The Avengers and this movie, which can be difficult to work with at times for the Marvel Cinematic Universe (MCU). There were shades of this in the original Avengers when the big, climatic moment of Thor resulted in Loki being sent off into space and Thor being trapped in Asgard, but both had to heavily appear in The Avengers. So, it’s not easy, and would be really easy to make a bad movie. Particularly one, as mentioned, that has to set up a lot of dangling threads that will make up the already announced sequels, Avengers 3 Captain America: Civil War and The Infinity Stones, which has already been announced to be two sequels. That doesn’t even begin to talk about the many, many, many, many, many other movies that will involve these characters between now and then.

So, how does Joss Whedon do in this latest outing of the Avengers will the deck stacked against him?

The obligatory recap: Following the events of The Avengers, Iron Man 3, Captain America: Winter Soldier, and Thor: The Dark World, as well as the Agents of S.H.I.E.L.D  TV Show, (And presumably Guardians of the Galaxy, but more on that in a minute.) The Avengers are getting together to find Loki’s staff. They do in a thrilling sequence at the beginning of the movie that sets up why we love watching these characters together so much. They of course find it, Tony Stark hooks it up to a machine that he’s using to try to set up automated Iron Men to protect the populace (because The Terminator doesn’t exist in this world?) and it accidentally activates Ultron, an artificial intelligence that is not three laws safe by any stretch of the imagination. From there we have battles, robots, and a giant city threatening to wipe out the Earth because it’s difficult for humanity to muck things up if they’re all dead.

Maybe in the future we start teaching robots love first. Show them a couple romantic comedies. THEN we get to the war.

Oh, and along the way we meet Scarlet Witch and Quicksilver because Marvel realized they had the rights to the characters and the name, but not the backstory or things that make them interesting.

First, the good, which is that it’s always interesting seeing these characters on the screen together, and not just from a “oh my Stan Lee they actually made an Avengers movie” standpoint. Chris Evans, Robert Downey Jr, Scarlet Johansson, Mark Ruffalo, and Chris Hemmsworth MAKE these characters easy to watch. They make them interesting, and that’s the core of the movie. We already know that billion dollar explosions and cool special effects can be ruined if you don’t enjoy those moments that make up the times when there aren’t explosions and cool special effects. (See: Transformers 1 through 4.)

There’s also the fact that they did pull out some interesting story lines from the Avengers rich history, such as Ultron, and tied it into Tony Stark’s fears that humanity is going to be wiped out by something bigger than them. Ultron is an iconic villain, played beautifully here by James Spader, scarily enough only being James Spader, and to use him here was great, particularly as all the pieces for the Infinity Gauntlet aren’t on the table yet, but heavily hinted at in Thor’s subplot.

However, that sorta brings me to the good/bad thing that’s been throughout the entirety of the Marvel Cinematic Universe Phase 2 films. The good, used here, was the fact that they acknowledged that these movies were taking place inside a shared Universe, which the First Avengers and the Phase 2 movies have been kind of shying away from a little bit. War Machine and Falcon show up for a few minutes to remind everyone that, hey, they were around during the last Iron Man and Captain America Adventures, and there’s a funny moment where Thor and Tony Stark try to one-up each other about where their particular significant others are.

But this still treads into the Phase 2 problem of NOT wanting to hint at future actions. Oh, we get a little visit to Black Panther’s home country, and we get a moment where we see the Infinity Gauntlet in full view, but that’s about it in terms of setting up Phase 3 films. There’s another movie coming out this summer, Ant-Man with Paul Rudd, that, while it will rake in money like Tony Stark at a craps table, it would be two seconds (or a missing end credits scene) to put him in the movie, but they didn’t feel a need to foreshadow him at all in this movie. Which is a little disturbing, particularly because in the original comics, it was Henry Pym (The original Ant-Man… who, through the trailers, we know is established in the MCU prior to this movie) who invents Ultron, and this would have been a prime example of how to bring him in quickly and quietly, while still keeping the focus on everyone else.

But Phase 2 has constantly had this problem: trying too hard not to reference the other movies. There’s a quick moment here or there, but nothing like Phase 1 that worked to set up the other films. A quick moment where there’s a reference to the Guardians of the Galaxy or any of the other Phase 3 films… two of which do not feature known actors, and feature obscure heroes, could have taken a boost from this film.

But, that’s all fanboy griping. The movie was awesome.

Oh, and there are some people who are a little confused and/or upset about the Hulk/Black Widow pairing, the thing is, it kind of works for me. I went in skeptical, having heard about it, but at the same time it makes perfect sense to me. These are two characters that started off very hostile to each other, but in the end they’re damaged people that can’t really exist in normal society. Black Widow trying to escape her past and isn’t sure how to function not as a warrior. Plus, there’s the fact that Mark Ruffalo and Scarlet Johansson sell it well. It just worked for me.

Overall, great movie, and great movie to start the summer movie season. Only one further “gripe”… I saw it in a theater where the projector kept cutting off. And one place it cut off was right before the Hulkbuster scene. I guess that means I’ll have to see it again…

Go see this movie. Yes, there’s a lot of backlash, but that’s what we do now when things get good. You’ll enjoy it.

Nine out of Ten, only because I don’t give out Tens this early in the season. I will probably revise this.
Posted by Bad Shakespeare at 12:14 PM