Bad Shakespeare Takes Ireland: Getting There was Half the Fun This time 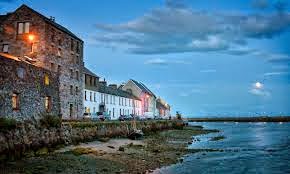 So, i made it to Galway. Fortunately with 100% less problems than the trip to Ireland in general, but then, I wasn’t flying. I just had to take a bus. Then a taxi. Then I had to walk a little bit.

I’m sure Shannon is a very nice area, but I really only managed to see “the Airport” and, “the hotel right next to the airport.” After being in the air for close to 24 hours (and not getting a nice, hot shower, food, or sleep) I really just wanted one thing. Well, three things, involving a shower, food, and sleep. Fortunately, the hotel could provide all three, so I went and did that. I did hit a pub because this is Ireland and it’s really easy to hit up a pub, just walk a few feet, and fortunately, the hotel had a pub right in it.

Then, I was off to Galway, where the first leg of my writing journey will take place. I started by catching the bus. I’ve taken bus trips before, so I was fully prepared to hop on board and take one, but I wasn’t prepared for something that affected me in England. The sheer terror the first time you get into a moving vehicle and realize that it is going on the other side of the road. Yes, that takes a little getting used to.

The bus trip was nice, I got to see little parts of Ireland that I’m sure I wouldn’t see by just sticking to a hotel in Dublin. There are signs everywhere… literally everywhere… still urging people to vote for Marriage Equality in the country. There were a few half hearted signs that urged against it, but the majority (like the vote itself) was very pro-Marriage Equality. I even saw one sign right in front of a church so that was nice. But there were a lot of sheep on the trip there. Enough that I fell asleep briefly while trying to keep track.

As for getting here… did you know that there were TWO places called The Grattan House? I do now. I hung out in front of the wrong one for a little while. Not too long, mind you, because everyone here is super helpful. Like, really helpful. I’m on a first name basis with not only the cab driver, but the bartender of the pub I found. (He was the nicest. He let me sample some beer before I got a full pint.)

The place we’re staying in Galway is nice… it’s almost like an apartment. It’s a huge suite with several rooms off a main room. Of course there’s a  main room. Its a big change from London, which was nice but the room was pretty much a place to be when I wasn’t touring London or getting food. Which was just as important. But this place feels homier. I hope I don't spend too much time being "at home" and I spend time exploring. It's hard to gauge that today, because everyone is exhausted and looking forward to getting to rest.

Good adventuring so far. I’m looking forward to seeing what else this place has to offer.