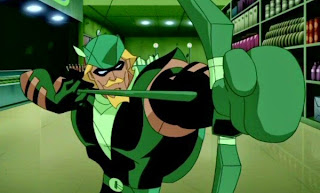 In my most recent regeneration as an English Graduate Student, I’ve had to take a wider variety of classes other than ones with the broad term of “teaching” and “how to make kids listen to you.” They were great classes, but I’ve found the ability to take a class in say, film or Shakespeare, or whatever the hell a novella is, really interesting. It’s a cool thing, really to be able to explore those things I really want to explore and write about them.

Unfortunately, with Graduate school being Graduate school, there are required classes, and this semester I had to take one on the ever so fascinating subject: Research. How to do it. How to write it up. How to cite it. Yeah. The stuff itself is as exciting as it sounds. Fortunately, for the final project, we were able to write about anything we want, so long as we have a coherent argument and did that research thing the class was about.

Naturally, I wrote about comic books. (I was going to something about the spiritual representations in The Big Lebowski, but I’m saving that for my Thesis.)

More specifically, I wrote about Green Arrow, a superhero that started out as a minor character but has gained more and more popularity over the years. And the thing is… he quickly became my favorite Superhero.

The paper I did specifically focused on his reinvention in the 1970’s from fun loving, quipping, billionaire playboy to social anarchist and hero to the common folk. Let me put it this way: If anyone had tried this Affluenza defense (the defense that some people are too rich to go to jail) they would have found themselves in the business end of an arrow from the Emerald Archer.

I gained a newfound respect for Green Arrow. He started pretty much as a joke, a hybrid Robin Hood/Happier version of Batman that showed up when they wanted Batman but they didn’t want the darkness involved with him. He’d attack bad guys with his non-lethal array of trick arrows, the most famous being a “Boxing Glove Arrow” that would knock the bad guys out. Yes, at one point firing boxing gloves at people’s faces was deemed an acceptable means to stop crime.

Around the 1970’s he was changed. Not given a new character with newer origins for the sophisticated 1960’s audience like Green Lantern or the Flash. He wasn’t given a bold new look or an updated background or even new powers. In fact, he was just sort of… changed. One minute he was quippy Green Arrow. The Next he was threatening to beat up Green Lantern for threatening to send a kid to jail.

That’s interesting to think about. Out of all the comics created in the 1940’s, only a handful of characters survive as we recognize them. Mild Mannered Reporter Clark Kent. Billionaire Playboy Bruce Wayne. Both of which have had multiple TV Shows, comic books, movies, action figures, appearances in other shows, and even breakfast cereals about them. If you show a kid in Africa who doesn’t speak English a Superman “S”, chances are he’ll know what it is. We technically can’t go a few years without naming a reigning actor to play Batman. (Although we’ve depleted enough of this resource to be all the way up to “Ben Affleck.”) So, it’s these guys and Green Arrow, most of people would identify as the latest gritty reboot of Robin Hood if they ever got a real look at them.

The thing is, this “conscience” version of Green Arrow is the prevalent version of the character. The fact that he’s the moral center of the DC Universe- fighting outside the law, openly defying it if need be to do what is morally right – has been the character presented in modern pop culture. From the TV Show Arrow (which is the best Comic Book show on television now… sorry Daredevil fans.) to his appearances on Justice League Unlimited, where he’s recruited specifically to keep the Justice League in check, he’s more of a moral crusader, doing what is right in the face of an increasingly bitter or corrupt world. I’m starting to respect that more and more as the way a hero thinks.

It’s nice when research can come together.
Posted by Bad Shakespeare at 12:41 PM